How to outsmart your Lizard brain: Fear, Lampreys and Hot Yoga.

Let’s rephrase this and ask: What is stopping you in your tracks when you thought you wanted to move forward?

You already know. The one thing we all struggle with at times, regardless if we acknowledge it or not. It’s fear. It can be as simple as this, phone rings, “Hello, my friend asked me to come to Hot Yoga but I am afraid with my high blood pressure (bad back, bad neck, injury from 20 year ago, you can insert your malady here) that I should not be doing this. I can’t handle the heat and it seems dangerous to do this to your body”.

What can I say? After having practiced this yoga for 13 years to help alleviate my own extreme back pain (I had since my 20’s) and successfully circumnavigated drugs and surgery I am a firm believer. I know so many people that had their own story of healing that I just expect everyone to know about the therapeutic benefits of this yoga practice. However, it is not so and there are so many folks that have a different perception of Hot Yoga. The only plausible explanation to me is having FEAR and not understanding the therapeutic benefits of a Hot Yoga practice. When I say Hot Yoga, I mean the original 26+2 Bikram Beginners Yoga Series and not just any yoga in a heated room. There are many reasons why the original Bikram series just works!

Let’s get back to the FEAR part though. According to Mirriam-Webster the Definition of fear. 1 a : an unpleasant often strong emotion caused by anticipation or awareness of danger.
Dictionary.com states: a distressing emotion aroused by impending danger, evil, pain, etc., whether the threat is real or imagined; the feeling or condition of being afraid.

The two key words I am pulling out of here are “anticipation” and “whether the threat is real or imagined”. Let’s take a quick history tour back say 200,000 years ago when the species of homo sapiens first emerged in Africa. Fear is what kept us alive and we needed fear (alerting a specific part of the brain to release adrenaline, creating a rapid heartbeat, faster breathing, tense muscles etc. and cutting of blood flow to other parts of the brain/body) so we had enough sense to run away from a big fuzzy Lion when it was charging and not to try pet and cuddle him because he looks so cute and cuddly. But it goes back further than that, look at approx. 560 Million years ago, where scientists believe today that our nowadays cognitive brain has its roots. Our neural control system can be traced back to a fish called the lamprey (which still exists today) and a part of our brain called the basal ganglia. (source: Modularity In Motor Control: From Muscle Synergies To Cognitive Action Representation. Andrea d’Avella, Martin Giese, Yuri P Ivanenko, Thomas Schack, Tamar Flash).

Basically, our modern human brain started budding 560 million years ago. Today, our more evolved brains separate us from a jawless vertebra that still likes to suck on other fishes and things just like it did back then. However, there is that basal ganglia part stemming from that time and which today is still closely connected to our cerebral cortex, brain stem and other brainy areas. Yes, we have some of the same hardware as the lamprey. So why am I telling you this? In a nutshell, this is the key why parts of our “lamprey” brain still overwrite cognitive thinking. This is a huge enlightenment.

Have you ever told yourself “don’t do this” and then you did it anyhow even though you knew better? An easy example is eating something that you tell yourself you shouldn’t (your cognitive brain reasons) and then some other voice (the lizard brain says, go ahead, we need the calories and fat so eat it) and like a magnet that cupcake finds its way into your hand to your mouth 😊. Have you ever decided you needed to save money and then couldn’t help but buy that expensive (sweater, shoes, fishing rod, etc.) anyhow? Were you determined to do something and then just procrastinated until it was too late? Have you ever experienced situations where despite your rational thoughts, you started behaving in disaccord to your thinking like you are a lobotomized puppet? Have you witnessed yourself doing things and followed along like a programmed robot while your cognitive brain is screaming “don’t do this”?
The cause of all the above is simple. The lizard brain is still in control. The lizard brain or “amygdala” is one of the three oldest parts of our brain and likes to hang out with the lamprey brain.

A good example of these brain regions in action are emotions like fear and anxiety. Back in the day hormones gushed into the bloodstream that helped us stay alive are now coming back to nib us in the rear. Our lives have changed so dramatically from the cave-dwelling hunter/gatherer to the blue-tooth enabled cellphone user (especially in the last 150 years), that our ancient brain hardware is starting to sidetrack us. This goes to the point of sending us signals that depending on the situation are no longer so strongly needed. Think about being stuck in traffic. You have an appointment and start to stress over being late. The lizard brain alerts the lamprey brain which calls up the adrenaline. See it’s an internal brain domino effect and once hormones such as adrenaline are released into the blood stream, there is no calling them back. Your hands start to sweat, your heart races and the road rage begins. On top of that, now your blood flow to the cognitive brain is being shut off! So, no more rational thinking. With these stress hormones released, our body does not know the difference between a harmless traffic jam or being lunch for a ferocious wild beast.

It is easy to imagine that when someone says “Hot Yoga” most likely your brain brings up wild images of pain and suffering because you just don’t know what to expect and all you remember is that aunt Martha said she almost had a heart attack and passed out in yoga class. Alone bringing up these images in your mind will create a hormonal response. Your brain does not differentiate between a real or imagined situation.

Let’s get our brains into the 21st century and try to be smart about this and other situations. You may be able to overcome the fear of your first Hot Yoga class by starting to think rationally before your lizard brain gets a chance to freak out. Consider that millions of people have practiced this yoga and they are all still alive (well, all that I know of). Spend a minute looking at our yoga postures beforehand and learn about the Hot Yoga benefits found on this page. On the same page you will also find several scientific studies in the right-hand column talking about the positive results of a regular Hot Yoga practice. You might even find a study done at Harvard talking about how yoga helps reduce anxiety.
Start to outsmart your lizard brain by being a step ahead taking the fear out of the unknown. Btw. this works for just about everything so get informed before you stress. Are you going to die in Hot Yoga class? Probably not, even if you try really, really hard. Our instructors have years of experience teaching and practicing themselves. We will instruct you to make sure you have a safe and exhilarating experience. Get informed before you go and check out this page. Will you break a sweat and die? The only way to find out is to tame that lizard brain and show up for class. 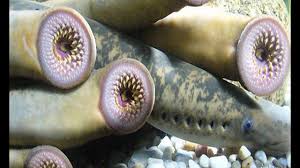 Don’t be a lamprey!